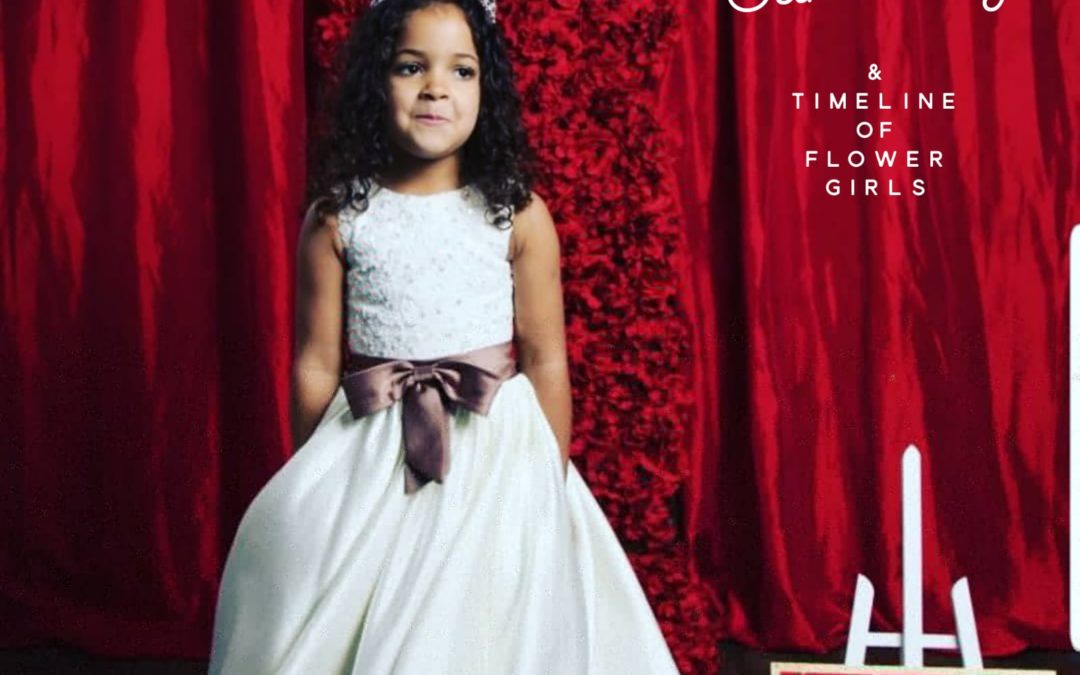 The appearance of flower girls in the wedding party is a long held custom dating all the way back to ancient Rome. While the dresses of flower girls and the items they carry have changed many times throughout the years, many believe that a wedding is incomplete without the presence of a flower girl. At Little Robes Royale flower girl dresses make up of 68% of our sales, which is why Coronavirus had such a huge impact on our business. However, it will take more than a virus to kill off a tradition that has been around since Ancient Rome! We are back with the historic tale of the flower girl!

The very first flower girls date back to this era. They often carried bunches of wheat with special herbs and would often sprinkle herbs along the path the bride would soon walk. The wheat and the herbs symbolized fertility for the married couple as they embarked on a new life together. In Medieval times the flower girl would often carry garlic as well to protect the soon to be wedded couple from evil entities and intentions.

The Elizabethan and Victorian Eras

The Elizabethan era saw the advent of scattering rose petals along the path the bride would walk, although in this time period the petals were often scattered along the path from the bride’s home to the church. The Victorian era is when flower girls began to look similar to modern day flower girls. Victorian flower girls often wore simple white dresses made with the intention of wearing more than once. They often carried a basket of fresh flowers or a floral hoop that symbolized that true love lasts forever and is without an end.

Flower girl dresses changed in style quite a bit through the twentieth century. In the 1920s they had more of a flapper look. Starting in the 1940s it was not uncommon for there to be two or more flower girls in attendance. This was most obvious in royal weddings, such as the wedding of Princess Grace in 1957 and the wedding of Princess Margaret in 1960. The 1950s saw a lot of different fabrics such as lace, satin, and organza. The 1960s rocked the “flower child” look. Empire waist gowns were quite prevalent in the 1970s and sometimes had brighter colors or sported different patterns. In the 1980s the trend was for the flower girl to carry dried flowers. Princess Diana was a huge influence on the 1980s. The 1990s saw an influx of more casual style dresses.

While the dresses of the past century have seen a lot of change, flower girls are still recognized as an important part of any wedding ceremony. It will be interesting to see how the trends of flower girls will evolve in the future.

Please head to our flower girl section for inspiration on your flower girl outfit – remember we can also custom design and change any dress you see to suit and match your special day!

Medieval Times
During medieval times, young attendants carried garlic. It was believed that garlic would ward off evil spirits. Varied significance was given to different herbs during this period.

Elizabethan Era
In the Elizabethan era, the path from a bride’s home to the church would be covered with rose petals. A flower bearer followed the musicians in the wedding procession. The flower girl would carry a silver bride’s cup adorned in ribbons. She would also hold a gilded rosemary branch.

Victorian Era
The flower girl of Victorian times more closely resembles the modern flower girl. Their dresses were of white muslin and featured a coloured ribbon sash. Modern flower girl styles continue to use sashes to introduce vibrant colour. With our “Create Your Dress,” you can even create an unique flower girl dress with a fashionable sash.

Edwardian Era
Flower girl dresses with satin sashes continued to be popular during the Edwardian era. The dresses often followed the style of adult gowns. Pouched over bodices and low slung skirts were popular features.

1920s
Flower girl dresses in the 1920s were influenced by the “flapper” style of the time. Flapper dresses used a “sheath” style. These dresses didn’t have waistlines or full skirts. The sheath was a simple, comfortable style which still inspires vintage-style fashions.

1930s
Flower girls during this period were part of the “Stylish 30s.” Soft ruffles and ribbon bows adorned dresses during this decade. The designs worn by Shirley Temple, the iconic child actress of the 1930s, give us a glimpse into this period.

1940s
Flower girls and children in general were welcomed at weddings in the 1940s. Celebrations were inclusive affairs rather than being exclusive events. It wasn’t even uncommon to have two flower girls participating in a ceremony. The wedding of H.R.H. Princess Elizabeth and Prince Philip in 1947 impacted wedding fashion towards the end of this decade.

1960s
A flower theme is synonymous with the 1960s. Flower girl dress fashion was in full and glorious bloom. One 1960s style featured a lace overlay of white daisies topping a lemon lining. Soft puffed sleeves and an empire waist completed the look.

1980s
Flower girls often carried dried flowers during the 1980s. The fashion scene, however, was very fresh and alive during this decade. The 1980s was the age of romanticism as well as the time for “power dressing.” Fashion followed many directions. Styles were influenced by popular culture and a princess. The television show “Dynasty” and “Princess Diana” drove the style of this decade.

1990s
The 1990s were seen as a time of “dressing down” when more casual fashion was in vogue. The casual trend seemed to inspire people to put extra emphasis on their special occasions. They wanted their formal wear to give them extra special fashion.

We had been in the children’s clothing business for two decades by the 1990s. During the early nineties, our company recognized the customer demand for superb formal wear. We shifted our focus from that point onward to the special occasions market.